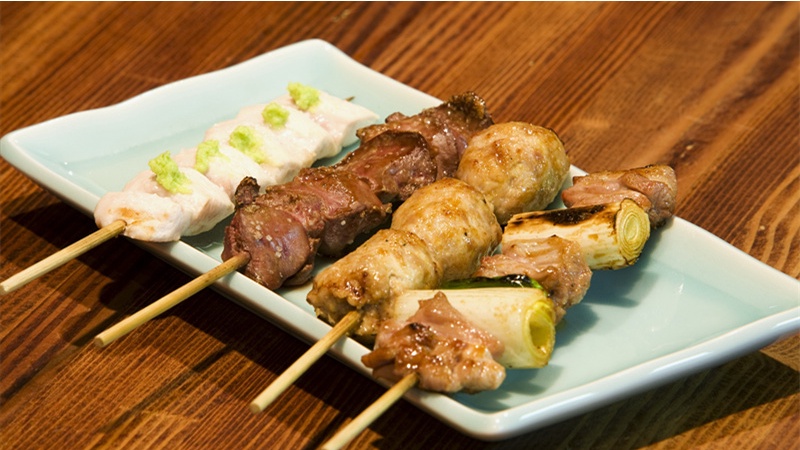 Chris Niu always dreamed of opening his own restaurant, and the 34-year-old Chinese-Canadian chef's love for food drove him to explore the world in search of new flavors.

Niu was touched by the tastes of Japanese yakitori, or grilled chicken, when he was studying in the United States and he was excited to be able to bring the delicacy back to China.

Since 2014, Niu was trained at three different Japanese restaurants for a period of over five months. And at Tori Tetsu, a yakitori chain in Japan, he was taught by their head chef who awarded him with a Grill Master certificate.

"When I was studying how to make yakitori, I began with learning how to slice a whole chicken correctly, then to preparing the skewers, then onto mastering the final step of grilling," Niu says.

As well as learning how to cut each piece evenly and to the same size, Niu also had to be taught how to debone the chicken properly. "Even the bones in the neck have to be cut cleanly," he says.

To gain his Grill Master certificate, Niu had to grill 20 skewers of 10 different types in 15 minutes, and master how to cook and season each one to perfection.

"Actually, yakitori is a bit saltier than other dishes, but as diners usually have a cup of sake first, they are less sensitive to the seasoning," he says.

Before his restaurant opened its doors, Liu spent a few months living in London and completed a culinary program focusing on Western cuisine at the Leiths School of Food and Wine.

When Niu finally opened his own restaurant in Beijing, Beyond Yakitori, his aim was to create the next generation of izakaya, or informal Japanese-style bar. This is where he uses his culinary knowledge to create his own unique take on yakitori.

Two sets of tailor-made grills were flown in from Japan to the capital. They are made of highly durable steel that is designed to withstand the high temperatures produced by one of the most purest grilling fuels-binchotan charcoal.

"This charcoal is considered to be the highest quality used for grilling in all of Japanese cuisine, because it produces no smoke, burns for a longer period of time, and can provide a heat of over 1,000 degree Celsius," Niu says.

"This heat will cook the surface of any ingredient instantly, and lock in all the juices and umami in the meat on the skewer. That is the true knack to mastering the art of yakitori."

Beyond Yakitori is also the first and only Chinese partner of Japanese yakitori chain Kuuraku. As an industry leader, Kuuraku Group has been running for over 20 years and now operates over 40 restaurants across Japan.

The group's barbecue chefs have to undergo a rigorous training program in yakitori and izakaya cuisine, and have to pass exams to become a certificated Grill Master.

Grilled chicken, of course, is the star of any yakitori eatery, yet whatever part of the bird is used-from breast to liver or heart-each one is cooked to present its best flavor.

Grilled white liver is a special dish created by Niu. The dish was inspired by a hotpot dinner he had with his staff, where they boil the chicken liver and dip it into sesame oil sauce with garlic.

According to him, white livers are only found in one in every 15 chickens, by natural occurrence, and he goes out of his way to order the white ones from his vendors.

"It's more tender than the regular liver and tastes more like foie gras, and we grill it our specially made sesame scallion dressing," says Niu.

Niu's version of Scotch egg, a British staple made with pork and a boiled egg, combines his London experience with his love of yakitori to form a chicken meatball wrapped around a perfectly cooked egg.

Niu also created a new dish which he calls grilled chicken oyster, which features the oyster-shaped meat from the back of the chicken thigh. "The part is called sot-l'y-laisse in French, which means the 'fool leaves it there'," Niu explains. "It's arguably the most tender part of the bird."

According to him, the birds are delivered fresh daily and all the skewers are prepared by hand.

"Our yakitori specialty, the inner organs of the chicken, are only allowed to be used on the day and the leftovers are discarded to ensure the utmost freshness," Niu says.

The salmon carpaccio at Beyond Yakitori is a mixture of Mediterranean and Japanese styles, to present diners with a more fun and exciting take on sashimi. Beef tataki uses wasabi vinaigrette as its dressing, further elevating dinners' taste bug.

With its array of sake, wine, beer and cocktails, diners' thirsts are sure to be quenched at Niu's place.